Between the 15th and the 17th of June, 2016 the 4th international project-, and the 3rd research visit was held in Budapest, with the participation of our colleagues from Germany, Austria, United Kingdom, Poland and Hungary. Even though the meeting started just one day after the fierce Austria-Hungary football match of the European Championship, the meeting was in good spirit from the beginning. During the three days we have spent together, we observed several best practices, followed by discussions with the practitioners as well as among ourselves, and also progress was made on the best practice guide.

On the 15th, we have started off by visiting the RS9 Theatre and had a long and particularly meaningful discussion with Katalin Lábán, who is the organiser of one-week drama camps at summers for children. She described the method she use, which is very much rooted in the person-centred approach – the overall belief in children, the unconditional positive regards for them as individual people. She has also shared some stories about children changing during the camps. The group has spent together 3 hours, discussing – among other things – the difficulties and the possibilities of freedom, or the meaning of love.

In the afternoon, following a cozy lunch in the city centre, the group has arrived to the Rogers Academy – the educational institution maintained by our partner, Rogers Foundation. In this „non-school” private students of secondary schools gather every day to study together, with the guidance of mentors and teachers. We had our management meeting on this location, covering issues like action plan from the last meeting, finances, dissemination, best practice guide, and preparation for the next meeting. We were also accompanied virtually by Wendy Russell, our external elevator, via Skype. 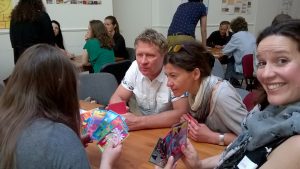 The group spent the whole 2nd day in the Magnet House in Budapest, at an event organised by Rogers Foundation. The so called „Let’s Play Right! – Day of Joy” was the closing event of a national project that explored different play/game-based methodologies, that young talented people can use in their work with children and young people. At the event the ARTPAD group has taken part in the opening session and two workshops: board games and tales. During the workshop of board games, József Jesztl, Máté Lencse and Kata Zsille presented some board games and their potential in working with children – followed by a discussion where they have explored more deeply how a wide knowledge of board games, and choosing the right one, can change certain social dynamics and change the life of children. The workshop on tale was led by Júlia Heltai and Anikó Kárpáti – after some experiential practices, Júlia explained the concept of tale pedagogy and tale therapy, and how they can be implemented. She has also told a story and provoked a little discussion about it.

At the third day, although we planned to have a session on simulation games, presented by Virág Suhajda, we decided to go on with our work on the best practice guide, as we felt we hadn’t progressed enough on the first day. With a very fruitful and intense session in the morning, we managed to take a huge step in our process. Led by Virág, we had a brainstorming session about what we, as a group, thought are the most important aspects of the „best practices” we had witnessed so far, in relation to developing resilience in children. First we collected those ideas, then created groups of statements, covering different topics: methodology, alignment, empowerment of the child, attitude of the adult, environment and social aspects. As we looked at our list, we realised that we managed to crate the core of our guide, the six central principles, that we, as a group, think are essential when developing resilience in children with the help of play and drama. 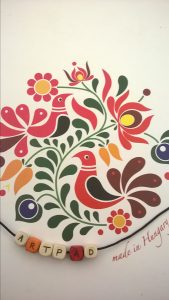